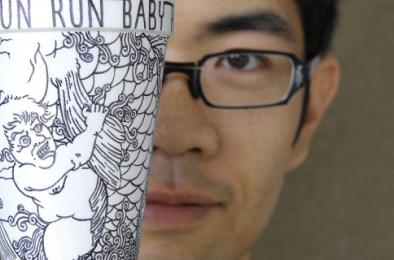 At parties I’ve often found myself drawing on styrofoam cups or making intricate indented patterns with my thumbnail but the result was never anything I ever wanted to keep nor did it ever occur to me that I could because… It’s called a disposable cup.

Here is a guy that changed all that for me.

Cheeming Boey AKA “Boy Obsolete” is a Malaysian born artist living in Newport Beach who has become famous for his Sharpie styrofoam cup art. His story goes like this…

While at a coffee shop itchin to doodle (with no paper in sight) he began drawing on a white foam cup. He found it so enjoyable he turned it into a hobby the results of which adorned his workspace. Que the co-worker a “sourpuss, nay-sayer” (all these types of stories have one) who asks our hero:

“So…what are you going to do with all these cups?”

To which our hero responds: “They’re nice, maybe I can sell them one day.”

“No one is going to buy that crap.” replies Mr. Sourpuss.

Well Mr. Sourpuss, one mans “crap” is another mans ticket out of the lame, stuffy cubical you probably still find yourself in today.

Our “Boy Obsolete” makes anywhere from $200 to $1500 a piece for his awesome “crap”, and has become the literal Poster Boy for Sharpie.

The creative prowess and patience needed to create such great art is phenomenal and it is obviously a demanding medium to master. For starters, it’s curved so every drawing must re-connect to its starting point. It smudges easily (this alone would drive me batty) and if you make any mistake…oops…there is no “undo” button.

For Boey, each cup takes anywhere from a few hours to several months to create. He’s even been known to just stare at a cup for hours planing his next move. What is also noteworthy is that he incorporates a lot of different drawing styles such as cartoons, stippling or Japanese wood carvings.

Because a white foam cup is not a “Green” product Boey is constantly receiving comments like: “Why don’t you draw on a more suitable art medium?”

In Boey’s own insightful words: “These cups last thousands of years, and my Sharpie says it’s permanent ink. These things are going to last generations. It’s archival material.”

Boey’s art makes me wanna run out and buy a giant Box-O-Sharpies and a big ass bag of earth unfriendly cups.

You can buy a Boey Cup of your very own here: The Etsy Boy Obsolete Shop